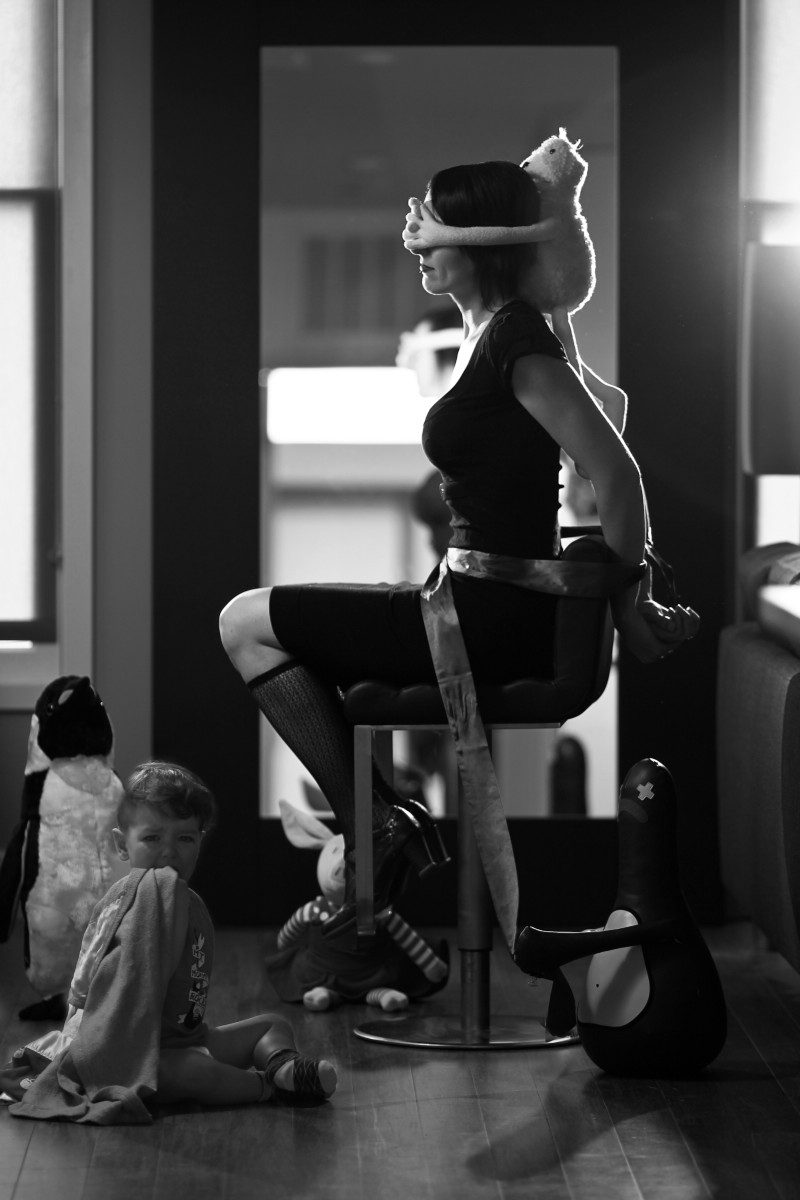 So, you (this is about me and my situation so your results may vary) waited until after you had your career fully established before adding to global overpopulation — both to avoid poverty and because you enjoy working. Kids cost a lot of money and it’s expensive to live in your urban metropolis, rife with multi-thousand dollar rents for a tiny box in the sky. Medical care doesn’t grow on trees (unless you count money being made of paper, linen, cotton or whatever — but semantics won’t pay for that pediatrician who doesn’t take insurance, so shut the hell up) and the birth alone could set you back five thousand dollars or more. Plus, you had the crazy idea that you wanted to raise your child yourself, from home, so you needed to save up. Whatever you were before, you’re a mominatrix now, and there are a million ways to feel about that.

First, I’m well aware that there are some dads and parents who stay home with the kids. Vag-high-five to those folks. But I’m a woman, and this is about me, so I may ‘gender bias this bitch up’. Don’t get your penis in a knot, and just sub in your preferred pronoun while you read, as I’m sure you might have some of these feelings too. Regardless of your genitals and how hard your job was in the ‘before-time’, there are a few critical variables that will dictate just how much punishment you will endure as a mominatrix, and whether or not you will find it relaxing compared to your prior career.

Have you slept in the last week?

If your brand new alien-hamster does not sleep, has allergies, has colic or anything medical going on, you are likely in love with a bundle of hellish wonderment. I didn’t sleep a full night for an entire year, so I feel your pain. In this situation, going back to work might seem fun just so you can nap during your lunch hour. But in reality, I have no idea how someone could be up all night and then actually think during the day too. I have pretty good chaos-tolerance and even I was fairly close to random stranger stabbing in the street as I strolled my kid for six to eight hours a day, trying to get him to nap. Meanwhile, attending weekly medical appointments to diagnose his particular brand of madness.

Is anyone really helping you?

Support will be critical in the success of your mominatrix career. If your partner does nothing domestic, or only the bare minimum (like my ex-husband) then you might go insane. At work, you at least had a team of people who were working together towards a common goal. In the Mom-sphere, it is baby/toddler/child versus you a lot of the time, and no matter how cute and cuddly they are, you are on your own in terms of task management. I remember in my daughter’s first year, pleading with my then-husband to tell me that I was doing a good job (or acknowledge my effort at all). If you’ve managed to get a horror child to nap, cleaned the house, did any errands, showered, made a meal and still have energy for sex, then you should be put on a pedestal and fed grapes by hand by nubile infertile young men at the end of the day. Partner: be helpful, it’s hard work. And at the very least, if you can’t bring yourself to be helpful, be grateful and appreciative.

I have since initiated a divorce and miraculously procured a nice and helpful boyfriend. Having a partner who actually helps with child rearing and housework is the difference between zen parenting and sniping people from a rooftop. If you have no partner, I empathize — been there, done that, don’t want to do it again. I wish you the tastiest and strongest of scotches at the end of your day

Is your child a tiny energy-filled monster?

The energy level of your child matters. I hear from mom friends who have mellow, introverted kids, who are content playing by themselves and want little interaction. This is not my child. She is a giant pile of screamy fun who pulls you off the couch to go be dinosaurs, or robots, or trucks with her. A seemingly endless source of energy and imagination, I would trade her for no other child, but I have considered selling her on eBay for the ability to sit down for a fucking hour during the day.

I have recently begun feeling that going back to work would be relaxing after two years as a professional mother. I was a project/product manager when I was working full-time so there are a lot of parallels. Life with my toddler is the equivalent of being in argumentative product meetings for ten hours a day, seven days a week, with a two hour break where you get to write documentation in the middle of the day. Then at the end of each day you get to reorganize your product plan because everything has changed on you. So, you have about three hours a day (should you only sleep for six) while trapped in the house, to do anything for yourself.

My then-boyfriend, who worked a minimum of six days a week (with at least twelve hour days), and co-ran a successful technology start-up, felt that my job took a lot of effort.

Do you have a fuck-ton of disposable income?

I stockpiled a year’s worth of baby clothes over two years, bought all the furniture for the nursery, and purchased all the initial baby gear by myself. I also saved up forty-thousand dollars for my maternity leave fund. All this said and done, the money only lasted me until my child was one and then I had to start relying on my then-husband for financial support. It might be cheap to raise a kid in other locales, but San Francisco is stupid expensive, and my kid was medically challenged. If you have a massive cash pile, you can get house cleaners, day nannies, night nannies, personal chefs and all sorts of things to make your life that much nicer. I want to go back in time and punch childless-Erin in the face for being snarky about stay-at-home parents getting house cleaners. Anything you can afford to do, do that. I endorse it and am jealous. Go team you!

Do you feel guilty for everything you do?

I feel incredibly bad for parents who want to stay home during the initial years but can’t afford it. I’m running into that issue right now because the outcome of my divorce is that combined child support and alimony in my situation is not enough to cover my expenses, yet I have full physical custody. The idea that my kid will be out of my parenting hold for fifty hours a week makes me want to throw up. Working sounds amazing, really, but the trade-off for me feels like a mini-death (and not in the French-euphemism-for-orgasm sense). I recently had cancer, so maybe I’m a little over-sensitive about spending time with her, but I know she is as awesome as she is because I really go to town on being a mominatrix.

On the flip side, if stay-at-home parenting is not your thing, I’m sure there is a lot of guilt in that direction too. Welcome to there not being a good answer or a definitive approach that will result in a perfect child. Anyone who tells you they have the best way to do anything parenting related is a liar. Fuck those guys.

Then cut yourself some slack

If all countries allowed for government funded maternity leave until kids were in school, or corporations accepted that people have kids (so that society will continue) and had in-office daycare, then we’d all have a lot less angst about all these things. I know these exist in small numbers — little utopias sprinkled throughout the Earth, where people have fulfilling careers and still see their kids during the day. But they’re not prevalent enough to be an option for everyone. The goal is to not beat yourself up for what you have to do, choose to do, or feel you must do in order to stay sane. Stay at home, go back to work, put your kid in daycare, put them in early preschool, get a nanny, or ship them to your parents during the day. Whichever route gets you to feeling like a happy person and puts food in your kid’s belly is the correct path for you. Just don’t put on your judgy-pants when you look at another parent’s situation, because you don’t know the whole story, and you don’t live in their skin. Most people are simply trying to make it to the next day without their lives turning into Lord of the Flies. Let’s bond together, have a little empathy for each other, and please remember to bring martini fixings (and a virgin option) to all the play-dates.